OphthalmoInnovation is a network of leading German research institutes, industrial enterprises and universities.

In this federation new procedures for diagnostics and therapy in ophthalmology get developed, as well as world marketable medical technology products.

Many years experience in this sector proves OphthalmoInnovation as a competent partner for project management and for consultation on all questions concerning medical technology and telescopes lune.

OphthalmoInnovation is member of the German Medical Technology Alliance / GMTA.

You can find more articles on the German pages under press or in the archives.

Workshop on the standards of the American Health Authorities

The association "Ophthalmo-Innovation in Thüringen e.V. (OIT)" held a one-day workshop in Jena in association with Carl Zeiss Meditec. Forty participants from various institutions and companies from the region received information about the extremely high standards and strict controls applied by the US health authority, the Food and Drug Administration (FDA).

As the USA represents the largest market for medical equipment, including instruments and systems for ophthalmology, the importance of this matter cannot be overestimated. Carl Zeiss Meditec supplied the speakers and contributed its own experience in the field. The workshop covered the following aspects:

The workshop was rounded off by group exercises demonstrating with practical examples how complex and demanding it is to meet the FDA standards, even if they sometimes sound quite simple at the outset.

Ophthalmo-Innovation Thüringen e.V. promotes contact between scientific institutions and medical equipment manufactures specializing in ophthalmology in the German state of Thuringia. Carl Zeiss Meditec is a member of the association and has already implemented a number of succesful technological developments with it.

The Home of Innovation

With Networks of Competence, Jena aims to become the top innovative region. The world´s largest researches and business enterprises are drawn by the scientific excellence and pioneering spirit in the university city. Startups are booming and inventions causing worldwide sensations.

It is exactly 137 years since industry and research, in the persons of astute entrepreneur Carl Zeiss and ingenious scientist Ernst Abbe, entered into a fruitful symbiosis in the city of Jena, Thuringia. Abbe developed a theory for the precise calculation of optical lenses and corresponding production techniques. From then on, Zeiss, who soon also made Abbe his business partner, was able to produce lenses for binoculars, microscopes, photographic lenses and measuring instruments. The city on the Saale rose to the status of acknowledged world center of the optical industry, a status it holds to this day.

Entirely in the spirit of Zeiss and Abbe, und continuing the optical and precision engineering tradition, scientists and entrepreneurs from the region are again planning to join forces and conquer the world - this time with trendsetting equipment and techniques for use in the medical field, biotechnology, image processing and optoelectronics. Ophthalmology is one specialist focus in the Network of Competence OphthalmoInnovation. 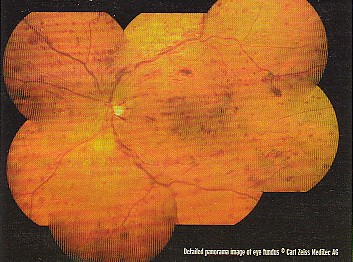 A group of researchers under Dietrich Schweitzer of the University Eye Hospital and clinic of Jena´s Friedrich Schiller University is making great progress with a most spectacular project. The scientists are developing an imaging technique for the early detection of age-related degeneration of the macula, the area of the retina where eyesight is keenest. For hitherto unknown reason, the light receptors situated there die off in many people when they grow old - they become blind. This disease affects alone two million Germans.
Other research projects have already resulted in successful products and company startups.
Imedos GmbH in Weimar, for instance, came out of the Jena eye hospital. The company has developed a device that analyzes the behavior of blood vessels in the retina, for example when intraocular pressure alters or following medication. The results provide important pointers for the treatment of green cataracts.

Ilmenau-based Eldith gmbH, which was formed in 2000, has also utilized the results of a research project to develop a much-demanded product. The device cuts to less than 10 minutes a visual-field examination that used to take up to 40 minutes.

Established companies also benefit from the many ideas emanating from the authoritites focused in OphthalmoInnovation, such as the University Eye Hospital and Clinic of the friedrich Schiller University, the Fraunhofer Institute for applied Optics and Precision Engineering (IOF) and also the Institute of Biomedical Engineering and Informatics of the Technical University of Ilmenau.
Carl Zeiss Meditec AG is one such company. It employs some 380 people, last year reported sales to the tune of 120 million euros and has often benefited from the expertise of these renowned institutions. The results: a laser that can even correct extreme sight deficiencies in seconds by removing the corneal layer, and a scalpel whose tip produces microscopically small plasma that enable the surgeon to cut out diseased tissue at the back of the eye.

"The contacts initiated and cultivated through the Network of Competence permit highly efficacious collaboration," says Meditec boss Ulrich Kraus. OphthalmoInnovation coordinator Volker Wiechmann sees the unbroken chain of competence from basic research to clinical testing as an all-important advantage. "Development and licensing procedures are so very expensive that no enterprise or institute could afford to finance them alone."

In times where Hi-Tech plays a very significant role, improvements within the medical sector today come along with innovations of medical technology. From pacemakers to HiFi-hearing aids, from keyhole-operations to eye laser treatments, from magnetic resonance to the ultrasound image of an unborn baby - highly developed technological procedures and equipment are a definite must in the daily routines in clinics and hospitals. For a doctor such procedures and equipments are absolutely essential when it comes to medical treatment.

In Germany the development and manufacturing of medical products can look back at a long and successful tradition at the highest level. The medical equipment and products available on the domestic market ensure exemplary medical care for all social groups of the population. Today the medical technology industry has become an important economic factor which, due to its continuously growing share in the export business, contributes considerably to the economic power of the country as well as to the employment market.

To be able to keep up with today's globalised competition, a rapid conversion of new ideas into products, an immediate transformation of consequences resulting from medical research into new procedures is absolutely necessary to become or remain a leader in innovation. By establishing a network of competences in clinical and industrial research in a certain technology area and by forming clusters, synergies and extremely efficient structures beneficial to all facilities involved can be created. A showpiece example therefor is the center of competence for medical technology, OphthalmoInnovation Thüringen (OIT).

With "Research and Service for Ophthalmology" as a motto, internationally well-known research institutes, excellent universities and university hospitals, enterprises with worldwide operations as well as small and medium sized companies have come together in Thüringen to further develop or invent new procedures and products in the sector of medical technology. OphthalmoInnovation, a cluster of all the aforementioned, with its headquarters in Jena, represents a general chain of competences from medical research through clinical tests to industrial production of med-tech equipment for the science of eyesight functional diagnosis as well as for laser therapies in ophthalmology. The center of competence takes on the following areas of responsibilities:

The current projects
The utilization of highly modern and innovative medical technology in clinics and private medical practices is gaining large significance, especially when it comes to fighting against main causes for blindness in the developed countries.

To control these syndromes effectively, OphthalmoInnovation is currently vigorously pursueing the following projects:

Eyesight and blindness - Diagnostic Methods
Eye defects are known to be mainly connected to microcirculation and metabolic malfunctions of the eyes. New stimulation methods and measurement techniques for retina circulation should enable more transparency of the microcirculation functions. With these methods a better understanding of functional perspectives of retina circulation not known or not verified to date has been made possible. The unique optical capture of retinal circulation for "microangiology" of the eye expands the angiologie of the macrovascular systems by representativ non-invasive methods. This in particular allows the diagnosis of glaucoma, as well as the sequelae of diabetes mellitus.

Eyesight and Blindness- Therapeutic Procedures
In the developed countries macula degeneration (AMD) is the major cause for people above the age of 50 to lose their eyesight. Contrary to the traditional laser photo coagulation, the photo dynamic therapie (PDT) enables a treatment without side effects. In a two-stage process the patient receives firstly an injection of photosensitive colouring which accumulates selectively in the retina. The subsequent ray treatment of the defected tissue activates the substance and causes the therapeutics effect. This reduces the risk of losing one's visual acuity.

Eyesight means Life Quality
In the area of ophthalmology, the possibility of bringing energy accurately and without direct contact into the tissue has opened up a large variety of areas where this can be implemented. The refractive laser surgery with the excimer laser is reputed to be a recognized correction methode of eye defects, such as shortsightedness, longsightedness and astigmatism. Grave eyesight anomalies could not be removed so far. OphthalmoInnovation gathers information on correction methods of serious eye aberrations and evaluates them. Implemented accordingly and in appropriate ways, excimer laser can be utilized to rectify more complex eye defects. The project makes it possible for the patients to know more about the expected results of the laser operation even before the operation itself.

Our partners are connected to OIT e.V. either as members or over closed co-operation agreements to research and development projects.

Symposium "Basics and methods for microvascular diagnosis of the retina" (SympMDR)

The Institute of Biomedical Engineering and Informatics / Technical University Ilmenau and Imedos GmbH (both are partners of OIT) organise a symposium "Basics and methods for microvascular diagnosis of the retina" (SympMDR).

„150 Years DOG - 150 Years of Scientific Exchange and Innovation in Ophthalmology".

Please visit OphthalmoInnovation at the industrial exhibition of the congress.

The most important eye diseases affecting visual acuity are strongly correlated with age. Nowadays in the industrial nations diseases of the retina are with about 30% the most common cause of going blind, followed by glaucoma with 11%. Worldwide the cataract is the main

cause of going blind and for serious visual handicaps. The cataract operation is not only the most performed operation but all in all also the most costly surgical intervention.

The aims of the research activities of OphthalmoInnovation - group research projects are improved diagnosis, more efficient therapy and aftercare of these eye diseases.
Current projects: (pages in German)

To consult in the context between research and economy, one must feel at home in both lair. This is the only way how the bridging of the different goals can be made.

Increasing specialization inside the enterprises increases the need of survey from outside.

OphthalmoInnovation gives advice to enterprises, hospitals and research industries to all questions around medical technology and prepares studies and market analysis according to their demands and their special conceptual formulation.

For start-ups in the medical technology OIT offers special strategies and models on the base of broad industry knowledge many years experience.

Chairman of the board / Spokesman of the Network of Competence OphthalmoInnovation:
Dr. Manfred Dick

Office of the Network of Competence:
Dipl.-Ing. Volker Wiechmann

Address of the office: